Victor Schlonga started playing tennis when he was in high school and enjoyed playing it through his school years. Not long after graduation, he became ill with a chronic condition called ulcerative colitis that took away not only his ability to play tennis but to be active in general.

After almost eight years, Schlonga joined GTC last summer and began playing tennis again. “Over the last year or so I’ve started a new medication that has helped me a lot and almost eliminated my symptoms,” he explains. “It’s allowed me to be active again.” Feeling healthy for the first time in years, he was eager to get back on the court and says, “Now, I’m just really enjoying playing tennis again.”

Schlonga takes full advantage of the offerings at GTC by hitting the court regularly and taking a number of classes. “I mostly do drop-in classes, Cardio Tennis and the Skills and Drills in the evenings and on weekends,” he says. “It’s been fantastic!”

Fairly new to the area, Schlonga also admits that joining GTC and participating in the classes has helped him build his community. “Like I said, I just started playing again a few months ago…I’ve been making a lot of new friends and meeting new people at Galbraith Center,” he explains.

When asked what he enjoys most about being back on the court, Schlonga says, “I have been telling people I enjoy it so much because it gives me an hour or two …or however long I’m playing, to just release whatever is weighing on my mind. All I think about is tennis and hitting the ball and doing my best on the court. I’m not thinking about work or whatever it is that’s on my mind at the time. It’s a really good stress reliever.

The relief from stress isn’t the only thing Schlonga appreciates about GTC. He says he’s grateful for the supportive and encouraging staff as well as the camaraderie of the other players.

Looking to the future, Shlonga plans on working towards continually improving his game. He says, “I’m looking forward to playing better and better as long as I can.” 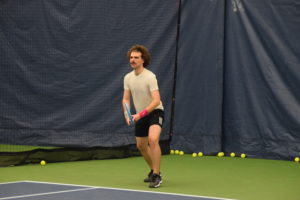